In Praise of Pentagonal 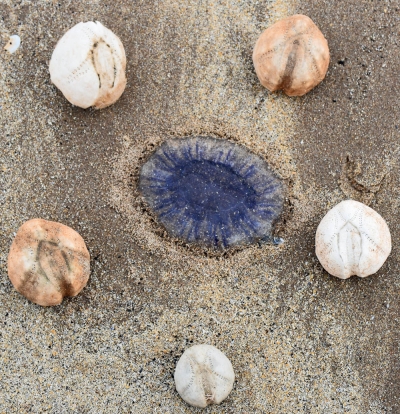 A Pentagon of sea potatoes round a jellyfish Ian Kille

A sharp eyed walk along the beach at Cocklawburn or on Lindisfarne and with a bit of luck you may find a small disc, shaped like a tiny petrified polo mint. 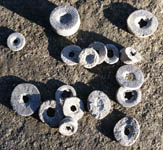 If you are particularly lucky, closer inspection will reveal that the hole in the middle of the polo-mint is not in the contemporary circular style but in an old fashioned and sometimes minutely detailed pentagon. These small discs which bear more than a small resemblance to a rosary bead are known locally as St Cuthbert’s beads after the spiritual head of the Lindisfarne community in the 7th Century. Whether the Celtic church used rosary beads as part of their meditative practice or not is debatable, but in any case these beautiful objects have a massively more ancient, and fascinating provenance. 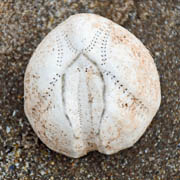 Pick up the shelly remains of a sea potato (aka Echinocardium cordatum), one of the types of sea urchin commonly found on the shore here in Northumberland and you will find that on the top of its shell there is a lacy tracery in a pentagonal pattern. 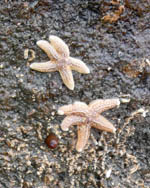 Similarly when rock pooling if you are lucky enough to find a starfish, its set of five arms is also conspicuously pentagonal. The pentagon of the starfish, sea urchins and St Cuthbert’s beads is a family brand, which gives a clue to their membership of the Echinoderm family. St Cuthbert’s beads are the fossilised remains of sea lilies, more formally called crinoids, the name comng from the Greek for Lily Form. These creatures are the 340 million year old remains of a rather unusual animal. 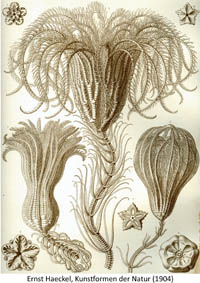 The sea urchins and starfish stalk the ocean floors to hunt for their food on little tube feet, not unlike the Luggage in the Discworld novels of Terry Pratchett. The crinoids on the other hand are the couch potatoes of the echinoderm family and have often opted for a sedentary life. The crinoids have a skeleton with root-like structures at their base, a long flexible column made of lots of little discs like a mini Greek column, and the animal itself lives in a swelling at the top of the column. This swelling, the cyst, has a mouth pointing upwards and is surrounded by arm like structures, and it just waits for food to arrive. Many varieties of crinoids can still be found living today but are nothing like as numerous as they were in the Carboniferous Period when the sedimentary rocks on the Northumberland Coast were laid down.

As well as pretending to be rosary beads lost amongst the beach pebbles, you can find the fragmentary remains of crinoid stems scattered in the hard limestones which crop out in many places up and down the Northumberland Coast. A careful search might also reveal various varieties of coral as well as brachiopods all of which point towards a time when this part of Northumberland was repeatedly covered by a shallow clear-blue tropical sea. However, it is only the crinoids and their echinoid family which contain the beauty of a pentagon, waiting to be picked up by our own five fingers.

Tweet
Tagged under
More in this category: « Where has Hadrian’s Wall Gone?
back to top